Geo-Writing was a project run during September 2014 in which authors submitted writing based on location-inspired prompts. To read the full list of published stories, click here.

A few authors submitted a set of stories which were linked in their own right. I have therefore decided to create a few separate pages for these authors.Here we present: Samantha Smith

It had seemed like a good idea, to get up high to get her bearings, but it had made things worse. The obvious landmarks were easier to spot, but the all-important details, the names and signs, were missing. So she swooped down for a better look. Who knows, someone might take pity, notice she was in trouble, offer assistance.

She'd heard, among the other students, that they were friendly here, it was a good place to come study. But while some of them were smiling at her, they weren't coming to her aid. Some of them looked downright dangerous, grabby and snappy. The smaller ones gurgled and reached sticky paws in her direction, and the... gulls, that's it, gulls swooped towards her with thoses terrifying squawks, creating disturbances in the air that buffeted and bounced her further.

Did they not see the sign? No one seemed to be paying attention to it. Maybe that was for the best, she sighed as another current caught her and wafted her back up. How could they possibly understand her anyway?

Next time she came to Earth, she'd pick something more practical. Ballons were unthreatening and fun, but they made for a most impractical disguise. 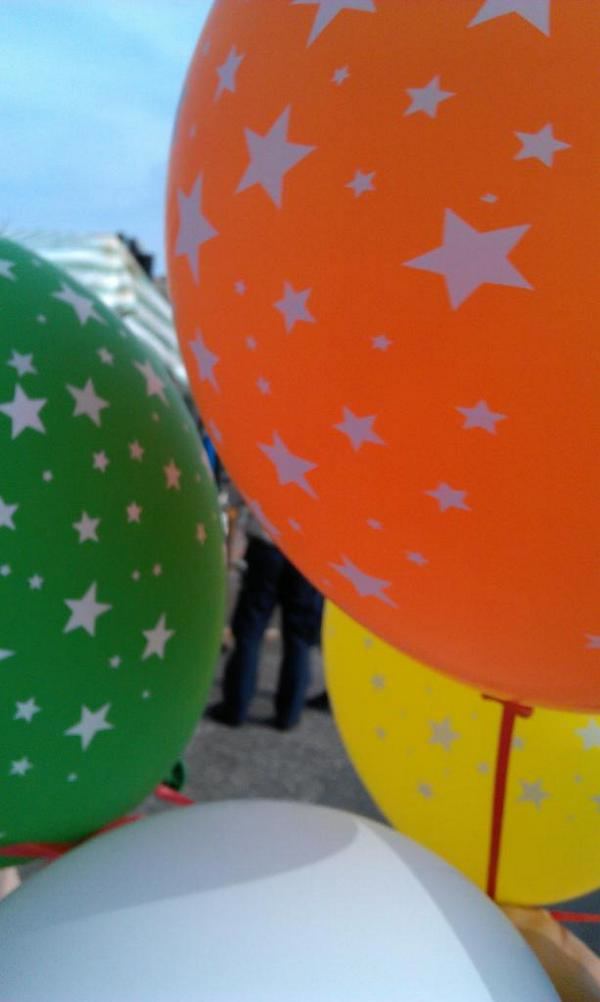 It was possible he'd overdone it. He'd been told the rendezvous was a place near George Street, a bar, and he'd gone all Bond. Sharp tailoring and a bunch of assorted fancy things he was pretty sure included a few carnivorous plants - not entirely inconspicuous, but he'd wanted to appear in control, smooth and unintimidated.

But all the way here he'd been noticing things. There were always bad suits in this part of town - no one could afford anything decent - but on numerous slabs of sunglassed muscle, too focused to fit in outside the Post Office and the cafes. His trendy, slim-cut suit was a delight to the eye, but it betrayed his growing nerves, the sweat on his back starting to soak through the lining.

The bar came into sight. Thank god! Oh no. A big black beast of a car, tinted windows, six doors, the sort of thing the US President sprang from in the news reports, was outside on double yellows. The illegal parking was the only normal thing about it all.

He glanced around. The nearest clump of suits was some way off, but no doubt they'd be much quicker off the mark than their bulk suggested. Then, out of the corner of his eye, something yellow. A balloon, scudding along avoiding the traffic and lampposts and buildings like it was aware of its path. He clocked the label - "help me!" - hanging from it on a scrappy piece of string. Could he? He affected what he hoped was a curious, delighted air and approached the balloon, the hairs on the back of his neck prickling as he realised the suits were moving his way. Reaching his free hand inside his suit jacket for his prized pen, then for the balloon's label.


That was too close, the balloon thought as she drifted back above the buildings and slowly regained her composure. Whatever had been going on with those humans, she knew she'd been lucky not to get any more caught up. The scrawny one's scribble on her label - a string of numbers squeezed around her request for help - was more than enough thankyouverymuch. Could they be coordinates? If so, how was she supposed to find them? She was a balloon! She didn't think they were, though; that human had been far too preoccupied to be helping her. She was starting to get her bearings, she realised, as she scudded along above one of the main roads. The streets were gradually slotting into a vague mental map - being a balloon, she was truly air-headed - and she bobbed happily as she saw she was heading back towards the centre of the settlement. There should be signs now, she thought, and altered her course so she could look better. Okay, up here... down this road... it should be around here somewhere...

There it was! The big glassy building from the pictures, the library! This was where she'd find what she needed to know.

A small human, accompanied by a bigger human, reached up towards her excitedly.

"Oh yes," said the bigger human, catching hold of the label and glancing at it curiously before passing it to the smaller one. "'Help me' and a phone number. That's interesting. I thought the scavenger hunt was next week. Come on, we can ask inside."

The balloon sighed in relief. Now if only she could get her string free of the smaller one's grasp...


No one understood why he'd wanted to become a clown. Clowns were scary, creepy, painted freaks, not to be trusted. Stephen King had a lot to answer for. But that wasn't what being a clown was. Being a clown was to be outside society's rules, to hold up a mirror to the twisted reality of the human condition, to make people question themselves, to show them the falseness of what they considered normality. It wasn't custard pies and slapstick, anyone could do that. The irony of that thought made him laugh, spreadeagled as he was on the ground, but the fresh surge of pain registering cut him short.

He'd expected some resistance to his newest work, mostly from parents who seemed to get it even less than their children, the transience and ungraspability of the meaning of life, made physical in his bunch of annotated balloons. But who would have expected those men?!

Flat on his back, he went over it again. There had been something odd about the way they'd swooped on him, like cartoon bees swarming on the unfortunate hunter. He'd watched plenty of cop shows and heist films, and his instinct on becoming the clear target of a menace of Secret Service types had been the universal "don't shoot" gesture. He'd let go of the balloons as he did. And every one of those muscled heads had swivelled up to watch the cheerful huddle float off, shifting their pursuit so seamlessly it was like he hadn't been there at all. Except he had been, and was now lying like he'd been fitted into a chalk outline, with every part of him complaining about the force with which that had happened.

They'd gone after his balloons.

...above him, another, lone yellow, balloon with a growing collection of labels hanging from its tail floated past contentedly.


Anyone passing Brunswick Square that afternoon would have seen a woman in a wedding dress with a mobile phone clamped to her ear, kneading her forehead. Sarah Sitwell was fuming. They had promised her everything was under control, there was nothing to worry about, that her big day - her first day off in three years - would definitely go smoothly. Yet here she was, missing from the ceremony, in her beautiful dress - the first piece of clothing shed bought in three years without a care for its utility, whether she could leap three stairs at a time, where her kit would go - trying to ascertain what on Earth had happened and whether she'd need to make the Important Call.

Adam had been, as ever, brilliant. He'd been there once or twice when the pager-in-the-pendant around her neck had gone off; he knew it was only triggered when no one else would do. But her team, her deputy, her counterpart from the neighbouring unit brought in especially to cover, had all sworn they wouldn't recall her except in the direst of circumstances. The pager had flashed, then chirped, right as Adam had been 'to have and to hold'ing. His shoulders had sagged for the briefest moment, then he'd rallied, kissed her cheek and told her to - go save the world - in that half-joking way of his.

If only he knew.

Part of her wondered if she could be brought up to speed, approve a few protocols and be back in the marquee in time to dole out cake to bemused guests. She doubted it, sighing as the phone line connected, thanking her stars she'd agreed to the stupid garter, and that she'd tucked her control centre pass under it.

"Sitwell here," she growled. "This had better be good."

Follow @geowwriting Geo-writing on Facebook
Please note:(After completing this form, you will be returned to the home page).

Created by Richard Hearn, developer of Paragraph Planet as part of Brighton Digital Festival 2014. Spread the word on Twitter and Facebook, using #geowriting and #BDF14